I needed to go from Xujiahui to the airport, so I hurriedly concluded a meeting and I was looking for a taxi in front of the Meiluo building. A taxi driver saw me and very professionally came in a straight line and stopped right in front of me. Thus followed the story that astonished me greatly as if I had attended a lively MBA course. In order to faithfully preserve the intent of the taxi driver, I have tried to reproduce his original words according to my memory.

"Where do you want to go? Good, the airport. At Xujiahui, I loved to get business in front of the Meiluo building. Over here, I only work two places: Meiluo building and Junyao building. Did you know? Before I picked you up, I circled around Meiluo building twice before I saw you! People who come out of office building are definitely not going to some place nearby ..."

"I have to know statistics. I have made detailed calculations. Let me tell you. I operate the car 17 hours a day, and my hourly cost is 34.5 RMB ..."

"How did you arrive at that?" I asked

"You calculate. I have to pay 380 RMB to the company each day for the car. The gas is about 210 RMB. I work 17 hours per day. On an hourly basis, the fixed cost is the 22 RMB that I give to the taxi company and an average of 12.5 RMB per hour in gasoline expenses. Isn't that 34.5 RMB?" I was a bit surprised. I have taken taxis for ten years, but this is the first time that a taxi driver has calculated the costs this way. Previously, the taxi drivers all tell me that the cost per kilometer was 0.3 RMB in addition to the total company fee.

"Costs should not be calculated on a per-kilometer basis. It should be calculated on an hourly basis. You see, each meter has a 'review' function through which you can see the details of the day. I have done a data analysis. The averarge time gap between customers is seven minutes. If I started counting the costs when someone gets in, it is 10 RMB for about 10 minutes. That means each 10 RMB customer takes 17 minutes of time, which costs 9.8 RMB (4.5 x 17 / 60). This is not making money! If we say that customers who want to go to Pudong, Hangzhou or Qingpu are like meals, then a 10 RMB customer is not even a bite of food. You can only say that this is just a sprinkle of MSG."

Great! This driver did not sound like a taxi driver. He seemed more like an accountant. "So what you do then?" I was even more interested and I continued my questioning. It looked like I was going to learn something new on the way to the airport.

"You must not let the customer lead you all over the place. You decide what you want to do based upon the location, time and customer." I was very surprised, but this sounded significant. "Someone said that the taxi driving is a profession that depends on luck. I don't think so. You have to stand in the position of the customer and consider things from the customer's perspective." This sounded very professional, and very much like many business management teachers who say "put yourself in others' shoes."

"Let me give you an example. You are at the entrance to a hospital. There is someone holding some medicine and there is someone else holding a wash basin. Which person will you pick up?" I thought about it and I said that I didn't know.

"You take the one with the wash basin. If you have a minor complaint that you want to be examined and to get some medicine, you don't usually go to a faraway hospital. Anyone who is carrying a wash basin has just been discharged from the hospital. When people enter the hospital, some of them die. Today, someone on the second floor dies. Tomorrow, someone
on the third floor dies. Those who make it out of the hospital usually have a feeling of having been given a second life and they recognize the meaning of life again -- health is the most important thing. So on that day, that person told me, "Go ... go to Qingpu." He did not even blink.
Would you say that he wanted to take a taxi to People's Plaza to transfer to the Qingpu line subway? Absolutely not!"

I began to admire him.

"Let me give you another example. That day at People's Plaza, three people were waving at me. One was a young woman who had just finished shopping and was holding some small bags. Another was a young couple who were out for a stroll. The third one was a man who wore a silk
shirt and a down jacket and holding a notebook computer bag. I spent three seconds looking at each person and I stopped in front of the man without hesitation. When the man got in, he said: 'Yannan Elevated Highway. South North Elevated Highway ...' Before even finishing, he could not help but ask, 'Why did you stop in front of me without hesitating? There were two people in front. They wanted to get on as well. I was too embarrassed to fight with them.' I replied, 'It is
around noon and just a dozen or so minutes before one o'clock. That young woman must have slipped out at noon to buy something and I guess that her company must be nearby. That couple are tourists because they are not holding anything and they are not going to travel far. You are going out on business. You are holding a notebook computer bag, so I can tell that this is business. If you are going out at this time, I guess that it would not be too close.' The man said, 'You are right. I'm going to Baoshan.'"

"Are those people wearing pajamas in front of supermarkets or subway stations going to travel far? Are they going to the airport? The airport is not going to let them enter."

That makes sense! I was liking this more and more.

"Many drivers complain that business is tough and the price of gas has gone up. They are trying to pin the cause down on other people. If you keep pinning the cause on other people, you will never get any better. You must look at yourself to see where the problem is." This sounds very familiar. It seems like "If you cannot change the world, then you should change yourself" or perhaps a pirated copy of Steven Corey's "Circles of Influence and Concern." "One time, on Nandan Road, someone flagged me down and wanted to go to Tianlin. Later on, someone else flagged me down on Nandan Road and he also wanted to go to Tianlin. So I asked, 'How come all you people who come out on Nandan Road want to go to Tianlin?' He said, 'There is a public bus depot at Nandan Road. We all take the public bus from Pudong to there, and then we take the taxi to Tianlin.

"Therefore, I say that the attitude determines everything!" I have heard dozens of company CEO's say that, but this was the first time that I heard a taxi driver say that.

"One time, a person wanted a taxi in order to get to the train station. I asked him how he wanted to go. He told me how to get there. I said that was slow. I said to get on the elevated highway and go this other way. He said that it was a longer way. I said, 'No problem. You have experience because you go that way frequently. It costs you 50 RMB. If you go my way, I will turn off the meter when it reaches 50 RMB. You can just pay me 50 RMB. Anything more is mine. If you go your way, it will take 50 minutes. If I go my way, it will take 25 minutes.' So in the end, we went my way.

We traveled an additional four kilometers but 25 minutes quicker. I accepted only 50 RMB. The customer was very delighted for saving about 10 RMB. This extra four kilometers cost me just over 1 RMB in gas. So I have swapped 1 RMB for 25 extra minutes of my time. As I just said, my
hourly cost is 34.5 RMB. It was quite worthwhile for me!"

"In a public taxi company, an ordinary driver takes three to four thousand RMB home per month. The good driver can get around five thousand. The top driver can get seven thousand RMB. Out of the 20,000 drivers, there are about two to three who can make more than 8,000 RMB a month. I am one of those two or three. Furthermore, it is very stable without too much fluctuation."

Great! By this point, I admired this taxi driver more and more.

"I often say that I am a happy driver. Some people say, 'That's because you earn a lot of money. Of course, you must be happy.' I tell them, 'You are wrong. This is because I have a happy and active mind, and that is why I make a lot of money.'"

What a wonderful way to put it!

"You have to appreciate the beauty that your work brings. Stuck in a traffic jam at People's Plaza, many drivers complain, 'Oh, there's a traffic jam again! What rotten luck!' You must not be like that. You should try to experience the beauty of the city. There are many pretty
girls passing by. There are many tall modern buildings; although you cannot afford them, you can still enjoy them with an appreciative look. While driving to the airport, you can look at the greenery on both sides. In the winter, it is white. How beautiful! Look at the meter -- it is more than 100 RMB. That is even more beautiful! Each job has its own beauty. We need to learn how to experience that beauty in our work."

"Ten years ago, I was a general instructor at Johnson's. Eight years ago, I had been the department manager for three different departments. I quit because there was no point in making three or five thousand a month. I decided to become a taxi driver. I want to be a happy driver.

When we arrived at the airport, I gave him my business card and said, "Are you interested in coming this Friday to my office and explain to the Microsoft workers about how you operate your taxi? You can treat it as if your meter is running at 60 kilometers per hour. I will pay you
for the time that you talk to us. Give me a call."

Then I began to write down his lively MBA lecture on the airplane.

[Source: A forwarded email...]
No comments: 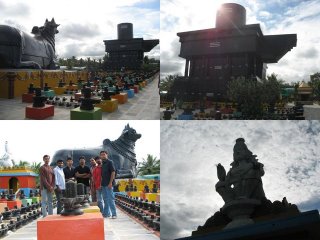 Trip to Kotilingam (Kolar Gold Fields) which is ~90 kms from Bangalore. This temple has lots of Shiva lingas all over the temple.

Email ThisBlogThis!Share to TwitterShare to FacebookShare to Pinterest
Labels: bangalore, friends, karnataka, kolar, kotilingam, lingam, shiva, temple
Newer Posts Older Posts Home
Subscribe to: Posts (Atom)
Tip: Save Power - Set your monitor with 'BLACK' background screen and this will SAVE 20-30% of power - Minimise all Windows when not in use. Switch of the Monitor when not in use. Find more here